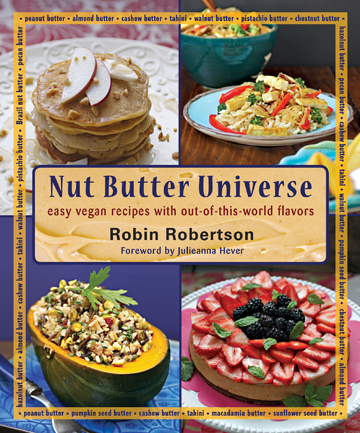 I am excited to introduce Robin Robertson’s brand new, hot-off-the-press cookbook that is so unique and creative, you’ll want to test every decadent recipe. Nut Butter Universe is chock full of insanely delicious choices, it’s hard to know where to begin, from Peruvian Peanut Potato Soup and Linguine with Thai Pesto to Peanut Butter Cups and Pineapple Coconut Cheesecake. Plus there is an entire nut butter 101 class built in to help you save money and keep it pure. I have to add that I am beyond honored to have written the foreword for this gem, sharing the extraordinary health benefits of nutrient-dense nuts. I have hosted Robin’s recipes and giveaways before with previous book launches. She shared her Cuban Black Bean Soup recipe from Fresh from the Vegan Slow Cooker as well as her Sweet Potato Spinach Soup recipe from Quick-Fix Vegan. Here, Robin clues us in about the magic of cooking with nut butters, shares her amazing West African Vegetable Stew recipe, and we are giving away a FREE copy of this latest masterpiece…

To enter to win a free copy of Nut Butter Universe, follow the options here: a Rafflecopter giveaway

With delicious nut butters on hand, it’s easy to think outside the jar when it comes to creative ways to incorporate them in your cooking. Not too many years ago, peanut butter was the only nut butter in the house, and we mostly used it to make sandwiches or cookies.  How times have changed! These days, peanut butter shares the shelf with almond butter, cashew butter, sesame butter, and many more.  Not just a spread for sandwiches, nut butters can be used in cooking to flavor, thicken, and replace dairy cream in traditional recipes. They can also be used to add complexity and depth to both sweet and savory dishes.

From the spicy Asian sauces and hearty African stews, to sweet puddings and cakes, nut butters can be used in a full range of recipes from starters, soups, and sandwiches, to main dishes, breakfasts, and dessert.

It’s easy to incorporate nut and seed butters into our diets for their protein content and other health benefits, as well as for their rich, luxurious flavors. For example, add a spoonful of your favorite nut butter to your morning smoothie. Stir in a spoonful of nut butter when you’re making a sauce to thicken it and add extra flavor.  Nut butters make excellent additions to pancakes, waffles, cakes, and cookies. They can be used to make creamy vegan mac and cheese and other saucy casseroles, or to enrich stews such as this West African Vegetable Stew from my new cookbook, Nut Butter Universe. 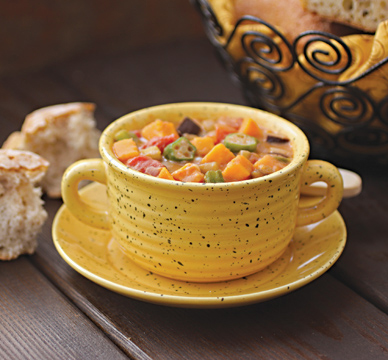 Brimming with vegetables, this flavorful stew is especially good served over rice or couscous or with coarse whole grain bread. Like most stews, this one tastes even better the second day, so make it ahead. The crops of peanuts (or groundnuts), sweet potatoes (or yams), and okra can be found throughout western African countries, where stews such as this are often called groundnut stew.