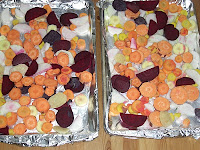 Every week, I look forward to retrieving my CSA box from the local elementary school cafeteria. I never know what I will receive in my crate filled with one day-old organic farm-fresh veggies. I view it as a challenge…what will I make with all of these items? Do I know what they are? Can I really live with myself if I am throwing fresh produce in the garbage week after week if it is not my favorite variety or something I am clearly unfamiliar with? Do I really have time to wash and prepare ALL of those veggies in one sitting?

So, after weeks of throwing away the huge radishes which I had no idea what to do with even though I had already invested the time washing, chopping and preparing them…AND after ultimately throwing out the beets even though those were peeled, chopped and ready to be tossed in the oven as well (to be honest, my favorite part of the beet is its greens…YUM!)…I decided to do an experiment!

Step 1: I took all of the root veggies in my crate (rainbow colored carrots, daikon radish, beets, a purple potato, yellow potato and some yams I had bought at the Farmer’s Market on Sunday and I washed and chopped them all into disks and moons.

Step 2: I split them in half amongst two baking sheets. Look at this array of color! This is the ultimateway to get all your antioxidants and phytochemical. I love to tell people to try and get the entire rainbow into their diet everyday to most effectively fight disease and promote health.

Step 3: Decide how to prep the trays for their journey towards roasting in the oven. This meant I called my Mother-in-law to get her recipe for sweet root veggies and then modify it to nutrify according to my health standards. In other words, I used maple syrup instead of brown sugar. 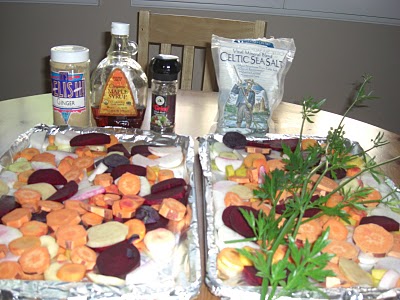 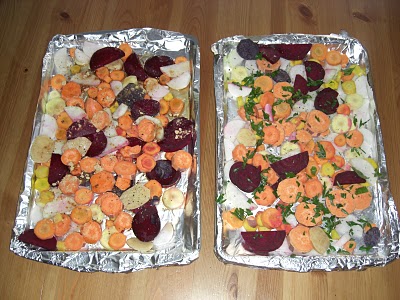 After roasting them for about 30 minutes, they were ready for the taste-test. 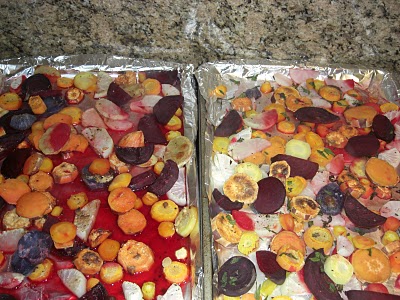 What was interesting is that they were both delicious and equally sweet. The ginger gave Tray 1 a pungent zest-iness that was truly decadent. It was like eating dessert! I couldn’t decide which recipe I preferred until I ended up throwing all of the leftovers into a large bowl and allowed their juices and flavors to combine and unify. Funny enough, this combination was my favorite. What a great way to use up all the nutritious and phytochemical-rich items in my weekly CSA box.