We are here in this lifetime for one purpose…to raise consciousness. What else is there?

After five days at NAVS Vegetarian Summerfest, submerged in the waters with some of the most inspiring people of our generation, it is impossible to come to any other conclusion. I met with people I have followed for years and that have been incidentally raised onto pedestals based on the daily miracles they perform; raising consciousness to any and every person they come into contact with. It occurred to me that deep inside each of us, there is proactive, compassionate potential that on its own could light the world…and the people I spent my week with were instrumental in the sparks lit in our community. One of the deepest beauties is the fact that we all have come there with different perspectives, talents, expertise, angles…but all with a single unified intention…to raise consciousness and awareness into the lives of as many people as possible. 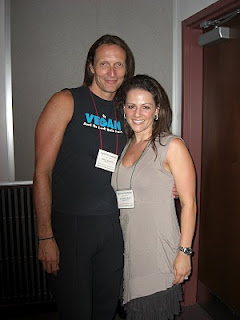 Shaun Monson had a huge impact on my life. He is the creator/writer/producer of the brilliant documentary, Earthlings. When I met him, I was in awe…he had mastered the concept of taking images of reality (current and historical) and creating a monologue of truth that is so painful-and yet, so critical…in a manner so compelling and provocative that you cannot turn your mind or eyes off of the images or the language. A poet, historian, theologist, philosopher and filmmaker all built into one man who can raise awareness to a point in which you never wanted to go…yet realize the imminence and necessity of doing so once there. Meeting him wastransformative in my life…he is in the end-stages of his newest film, the second part of his trilogy beginning with Earthlings, called Unity. The scenes from this second part are exquisitely and brilliantly painful as it forces the viewer to face-up to the bold duality we each experience on a daily basis in minor doses…all the way to the other extreme of this component of life…the realities of war, animal torture/mutilation/consumption, human distrust, and the search for understanding…as discomforting as it is to face this threshold, it may just prove to be the most important moment of epiphany necessary to make global change a possibility.

Gene Baur is a man that I have followed and admired for years. He is the man that discovered the first sheep, lying in a pile of disposed-animals, near death and fighting for her life, inspiring this initial rescue which blossomed into the miraculous creation and existence of the dual bi coastal Farm Sanctuaries that are responsible for the rescue of hundreds (if not thousands) of animals. I visited the Northern California location (in Orland) last winter in order to document its beauty for my program, Going Veg with the Plant-Based Dietitian and had fallen madly in love with the concept, desperately searching for a way to stop everything in my world in order to open a farm rescue of my own…In the magic essence of Summerfest, I was able to finally meet Gene…and pick his brain. He filled my energy vessel with a focus for my limitless inspiration and optimism, which was already overfloweth. 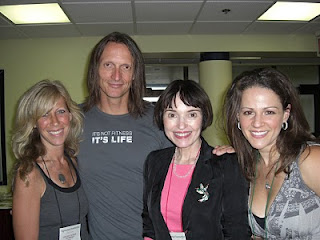 My favorite cookbook is The Vegan Table, a recipe collection that all of my omnivore relatives and friends appreciate anytime I attempt new samples and experiments when entertaining (which is rather often these days). So, needless to say, when I discovered how fabulous its author,Colleen Patrick-Goudreau, is, I went starstruck! In fact, she is the beautiful and generous being that drove me a couple hours to the airport for my treacherous journey home. How surreal to spend a couple hours in the car with a person who has inspired myself and many others to produce and impress others (particularly non-vegans) with tempting tummy-pleasers? What an exciting opportunity to get to know this genius recipe-developer who is a woman filled with so many other talents I am just learning about…podcasting, writing about compassion, etc. She has three new books coming out in the next few months…THREE!!! And they will all be fabulous! What an amazing chance to learn about this beautiful light in the plant-based world. 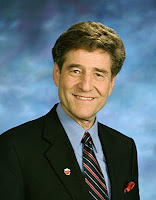 Dr. Hans Diehl is a man I consider one of my mentors. He began his career with Nathan Pritikin-a legend in his own category. Currently, Dr. Diehl is the celebrity genius responsible for CHIP (Coronary Health Improvement Project) in Loma Linda California at the renowned Loma Linda University and who is instrumental in improving the health of thousands of people across the world. So, imagine the magnificence of having this mentor of mine attend one of my lectures I gave at Summerfest??? That is one of the highlights of this trip and conference. Not only that, but we were able to spend some time together where he generously provided me with some ingenious wisdom of his years in the healing business, guiding me towards an ameliorated sense of responsibility towards helping others and in handling this new blossoming career of mine in proper order. I will be forever appreciative and indebted to Dr. Diehl for the time I spent with him in Pennsylvania. 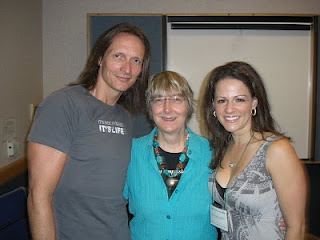 Carol J. Adams is a legend in the veg/feminist/animal rights activist world. Amongst her ground-breaking and provocative work is the 20 year-old book, The Sexual Politics of Meat, which took the veg movement to a whole new level! Also written by this pioneer is the book called The Pornography of Meat andLiving Among Meat Eaters. I was able to hear a couple of her phenomenal lectures and have her sign all three of the aforementioned books. She is wise and forward-thinking and I am grateful to have the opportunity to have my mind directed in a place it had never visited before…and has spiraled upward ever since.

On the last night of Summerfest, magic occurred…without that intention…there was a showing of a new-ishdocumentary entitled Peaceable Kingdom. This is a film describing the experiences of several animal farmers transitioning from enacting brutal torture, maiming and murder of animals secondary to the requirement of their ability to financially survive into the realization of the paradox of having to give their loving, trusting and sentient “pets” into the horrific agribusiness second step…leading to the demise and cruel situations these gorgeous animals unfortunately suffer. It documented the duality of believing their survivability depended upon raising and selling their beautiful animals and their deep understanding of the unrighteousness of bonding and raising them and selling them off after the trust developed. What was special about this film is the documentation of these phenomenal animals in their natural setting, relating to one another and to the humans that were lovingly taking care of them. I had never witnessed animals in these situations…the Mama chick feeding its baby and the baby curling up inside its mothers’ wing; the Mama sheep desperately searching for her baby as truckloads of lambs were being delivered to the farm after being separated; and the domesticated reaction of the goats and cows to its human owners as they pet and loved them. These are images that make me dream that I can one day acquire a farm sanctuary of my own…

Yet, the most touching experience of the whole evening (and I mean after a dozen tissues destroyed by the tears that refused to stop flowing from my broken eyes) was the recognition of several children who had participated in the experience of witnessing this powerful and disturbing film. There were several children who were enabled by their hesitant parents to be present for this event. I have never been as uplifted as when Manni, a 10 year-old boy of my new friends, stood up to the microphone to ask the producers and stars of the film, “what can I do to help the animals?. This was followed by a young girl, who could hardly control her tears, begging to understand how this happens…how animals are treated like this. Watching children hold each other, come to the understanding of why the animal rights movement exists, and ask critical questions was the most extraordinary experience of my life. Perhaps it is because I am a Mother…and an animal activist…and someone who has focused her entire career on educating others of the importance of eating a plant-based, whole food diet…I have never been so inspired/moved/hopeful as when I watched these youngsters have their epiphany…right in front of this loving, supportive crowd. As much as I know this evening is one these children will never forget, I also understand that I will retain it as one of the most touching experiences I have had to date…

Besides all of these people and experiences, I could go on and on about meeting heroes of mine including bestselling authors Brenda Davis and Joanne Stepaniak, super-energetic physicians Dr. Michael Greger and Dr. Neal Barnard, fellow nutrition experts John Pierre and Kerri Saunders.

What a concept to be surrounded by like minded people for five days! In all four of my lectures, I felt very much that I was “preaching to the choir”. Never in my lecturing career did I mention factoids such as “greens have twice as much protein then animal products” or “omnivores and vegans have identical risks for iron-deficiency anemia” and not have everyone in the audience have their jaws drop to the floor! I am empowered by the unification that occurred here and energized to continue spreading the message.