The Cost of Eating Animals

Dr. Richard Oppenlander is a sustainability consultant, researcher, and author whose award winning book, Comfortably Unaware has been endorsed as a must-read by Ellen DeGeneres, Dr. Jane Goodall, and Dr. Neal Barnard, among others. Dr. Oppenlander is a much sought after lecturer on the topic of food choice and how it relates to sustainability, all within the framework of fresh perspectives and critical insights.  He also serves as an advisor to world hunger projects in developing countries and with municipalities in the U.S. Dr. Oppenlander has spent 40 years studying the effects food choices have on our planet and on us. He started an organic plant based food production company, operates an animal rescue sanctuary (with his wife Jill), and is the founder and president of the non-profit organization, Inspire Awareness Now. Dr. Oppenlander has written a new, groundbreaking book titled, “Food Choice and Sustainability: Why Buying Local, Eating Less Meat, and Taking Baby Steps Won’t Work”, which has just been released and is now available.  Visit the Comfortably Unaware website for more. 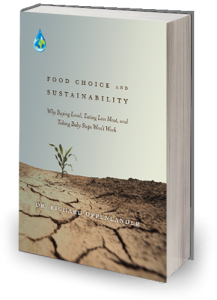 ***To win a FREE copy of this must-read, world-shifting book, see below (after the excerpt)***
Here is an excerpt from this brand new, must-read book on the Health-Risk Tax:

The demand to eat animal products contributes heavily to global warming and global depletion, and in doing so, it affects everyone on earth. In the U.S. and other developed countries, eating animals is one of the most significant risk factors found in nearly all of the most common diseases. It is, therefore, heavily implicated in rising health care costs, health insurance premiums, foods prices, and even labor costs for businesses. Those who eat animals are driving up all these costs while driving down productivity.

Of that, minimally $130 billion dollars spent were due to dietary choices related to livestock. I believe this figure is quite conservative and could be as high as $350 billion due to eating animals, because this is how some of the $3 trillion was spent:

These figures are truly staggering and are for just one single year. They also do not reflect loss of productivity. For obesity alone, it is estimated that the annual cost of the workdays missed is $30 billion, with employers losing, on average, $3,800 per year for a single obese person.

These are not just figures or statistics to me; they’re patterns that tell a story about what we choose to eat as a society and what happens to us afterwards—the stark and very real consequences. Eating animal products increases risks of contracting diseases that contribute to all of these health care costs. Eating plants, on the other hand, will take you in the other direction, protecting you from developing these diseases. All of this should be factored into our national health insurance plan and the premiums and taxes we pay. I often pose the question “Why should I pay for what everyone else decides to eat?”

My health care costs for the past forty years have been zero. I’ve never taken one aspirin, ibuprofen, or antibiotic. I’ve certainly prescribed quite a few medications over the years, but I have not taken any medications of any type. I have been at the same weight since I was sixteen years old. Thus far, I have not missed one day’s work for the past forty years from being ill, and I’m certainly not special at all. It’s because of what I eat.

Even with suggestions or new guidelines for eating healthier food, most people don’t comply. With an average diet of 2,000 calories per day, one should eat 2 cups of fruit and 2.5 cups of vegetables per day (relative to age, physical activity, and gender). However, 94 percent of the U.S. population does not consume this minimum target.

According to the Organization for Economic Cooperation and Development (OECD), a thirty-four-nation grouping of advanced economies, the average person in the U.S. spent $8,433 (public and private spending) on health care in 2011.

On average, an obese person spends $5,500 more on medical costs than a person of average weight in one year. In 2011, 36 percent of all adults in the U.S. were considered obese, and by 2018, it is estimated that will increase to 43 percent.

It is estimated that eating purely plant-based foods provides the following protective benefits, as compared to individuals eating the average amount of meat:

As an example of what effect a purely plant-based diet would have on health care costs, let’s look for a moment at hypertension. Worldwide, $500 billion was spent on hypertension in 2011—twice that amount if indirect costs are included. A 50 percent less risk factor in developing hypertension, simply by a change in food choice (elimination of all animal products from the diet), would save billions of dollars as well as improving the lives of millions.

If additional money is needed to help reduce our national debt (implemented along with a reduction in federal spending) as well as a way to increase revenues in Washington, it can be obtained from eco- and health-risk taxes.

Developing strategies in drafting, voting into action, and implementation would require increased awareness and a much more serious and progressive approach to policy reform.

A 10 percent idle or empty calorie food tax has been studied and proposed, which would apply to soft drinks and eventually other highly processed unhealthy foods. This level of taxation is far too lenient for animal products, however. Although many more factors could apply, a surcharge of 320 percent on all meat and dairy products could be justified as the beginning point for a health-risk tax, given the increased risk percentages for animal products versus plant-based foods, as they relate to the four most common and costly chronic diseases and five most common cancers. A 320 percent health care tax on just beef products (which is only one-quarter of all meat eaten per person in terms of pounds) would yield $2 trillion per year, or $10 trillion in just five years. Additional revenues could be generated by way of an eco-tax, likely to be significantly higher than the 320 percent health-risk tax, if proper values are applied to resource use.

Let’s look at how this could be applied.

U.S. national debt exceeded $16 trillion in September 2012 ($11 trillion public debt and $5 trillion intragovernmental debt), which is very concerning on a number of levels. Fully two-thirds of that debt is owed to the U.S. government by American investors, the Social Security trust fund, and pension plans for civil service workers and military personnel—the debt is owed by us. Even though China is the largest foreign owner of U.S. debt, it holds less than 8 percent of the money borrowed by the U.S. over the years. Nevertheless, the national debt has been increasing an average of $4.89 billion per day since September 2007.

Taxing meat and other animal products with a health-risk tax and eco-tax (in addition to controlled government spending) would accomplish the following regarding economics and our national debt:

Of course, these benefits would be in addition to the many others that a transition to purely plant-based foods would provide, such as decreasing the production of unhealthy foods, increasing economic viability of small farms that produce organic plant-based foods, and decreasing all aspects of global depletion, including rampant pollution and our national contribution to global climate change.