Pick Proper Packaging: Why the Whole is Greater than the Sum of Its Parts 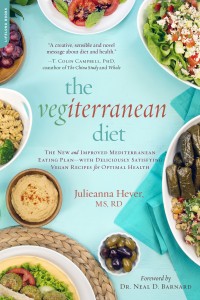 Here is an excerpt from my book, The Vegiterranean Diet:

Contrary to popular belief, we don’t eat isolated nutrients. We are not filling our plates with some protein, a side of carbohydrates, and a sprinkle of healthy fats. Instead, we are eating a vast biochemical symphony, built by nature, for nature, in order to function optimally. Nothing represents synergy as clearly as the consumption of whole plant foods. Nutritionism is the belief system that qualifies food based on its individual components. It disregards synergy and the additive effects of a combination of nutrients in one whole food. It ignores the exponentially enhanced value of the interactions between multiple parts and their exchanges within the human body’s intricacies. It is the reason people identify their diets as “low fat” or “low carb” or “high protein,” even though these diets have not been shown to be the end-all, be-all of ideal eating. It is also the reason that processed food items can be touted as healthy because they only have a certain number of calories or fat grams per serving and are sprayed with a synthetic vitamin to meet the daily recommended dose of vitamin C, for example, despite the fact that they may merely be composed of white flour, white sugar, salt, and multiple chemicals. It is one of the most pressing reasons why, with the thousands of diet fads out there, populations in general are gaining weight and infected by disease, as opposed to building a relationship with real food and connecting it to their lives. We are ostracized from real food when we are specifically seeking out certain nutrients and are dependent upon the nutrition facts label. Labels do not discern between two antithetical foods: an enriched product that was once an intact food, having had its original parts stripped away and then having other ingredients added to boost flavor, texture, and/or shelf-stability versus a real, complete food that had those nutrients in it originally. Although the label may not distinguish between real foods and lab-made foods, our bodies cannot be fooled.

So what’s in a package? One of the best ways to demonstrate this is to compare 500 calories of plant-based foods to 500 calories of animal-based foods. This chart is from The China Study, titled “Nutrient Composition of Plant and Animal-Based Foods (Per 500 Calories of Energy).” It uses the USDA Nutrient Database and an article on carotenoids since the database does not yet include phytochemicals. The plant-based foods are made up of equal parts of tomatoes, spinach, lima beans, peas, and potatoes, and the animal-based foods are made up of equal parts of beef, pork, chicken, and whole milk: 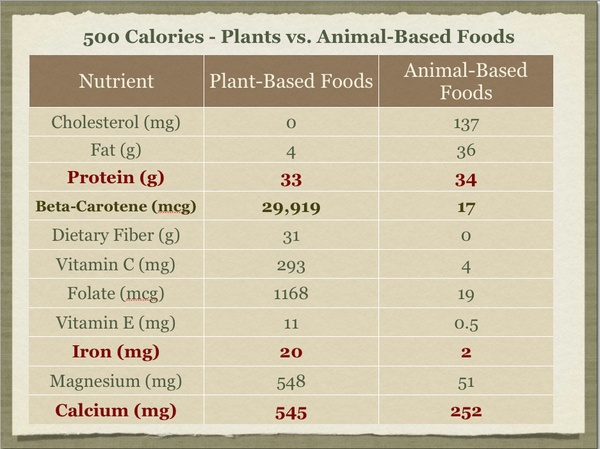 Plant foods also contain hundreds to thousands of different phytochemicals, which are not considered essential but are perhaps the most effective nutrients at fighting disease (see below). Truth is, our knowledge of phytochemicals is expanding rapidly, as new ones are discovered regularly and their functions and roles in the human body are expanding exponentially. Hence we need to look at the complete picture. A lot more is going on within those foods than meets the microscope. If you compare these two nutrient profiles in the preceding chart, it is clear that both what the plants have AND what they do not have in them are what make them so spectacular. Essentially, the large database of nutrition science consistently shows that the healthiest type of food pattern includes a high intake of fiber, phytochemicals, and antioxidants, as well as a minimization or elimination of saturated fats and processed foods.

In other words, both what we eat as well as what we do not eat provide the basis for the quality of our overall diet. For the same 500 calories, a meal may be rich in health-promoting nutrients, as well as devoid of all the unwanted ones. So while choosing foods, the packaging must be considered. Both options contain about the same amount of protein, but the plants also contain fiber, significantly more beta-carotene and other phytochemicals, folate, vitamin C, magnesium, calcium, vitamin E, and iron. Plants have zero cholesterol and a better fatty acid profile. Being particular and picking plantastic packages pays off.