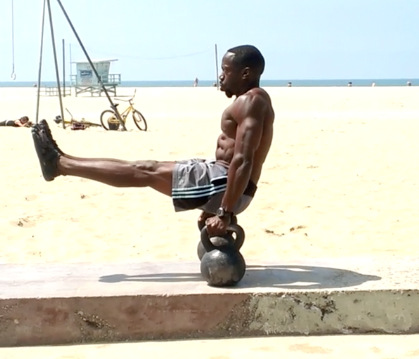 – 2.7 miles from the Venice Pier to the Santa Monica Pier (California)

Kappel is known in the sports and fitness training circle as the creator of FRE FLO DO; a training philosophy and system that Men’s Fitness once referred to as “one of the most intriguing and challenging workouts in the nation.” He has contributed to platforms like NFL PLAY 60 inspiring children to get active each day and has also has been featured in numerous publications and television programs all which highlight his unique approach to enhancing fitness and performance from average Joes to Olympic and professional athletes. Most notable in Kappel’s approach to improving the lives of his students and clients is his gift of helping people shift their mindset into a more conducive state where the physical improvements become mere by-products of a more profound and lasting change within. He is currently on the verge of launching a new mass market friendly system inspired by FRE FLO DO so that he may share the benefits of his time tested method with a global audience just as he has successfully done with his own clients for 23 years!

And he did it on a 100% whole food, plant-based diet without the use of supplements or powders!