Three Things To Know About Vitamin B12

How and Why to Supplement with Vitamin B12

You can get all of your essential nutrients* on a thoughtful plant-based diet…except for vitamin B12.

*Vitamin D is a nutrient our bodies were designed to attain via the sun. Though it is a common deficiency worldwide, this is not an issue exclusive to vegans.

Here are Three Things To Know About Vitamin B12….in collaboration with Vegan Street: 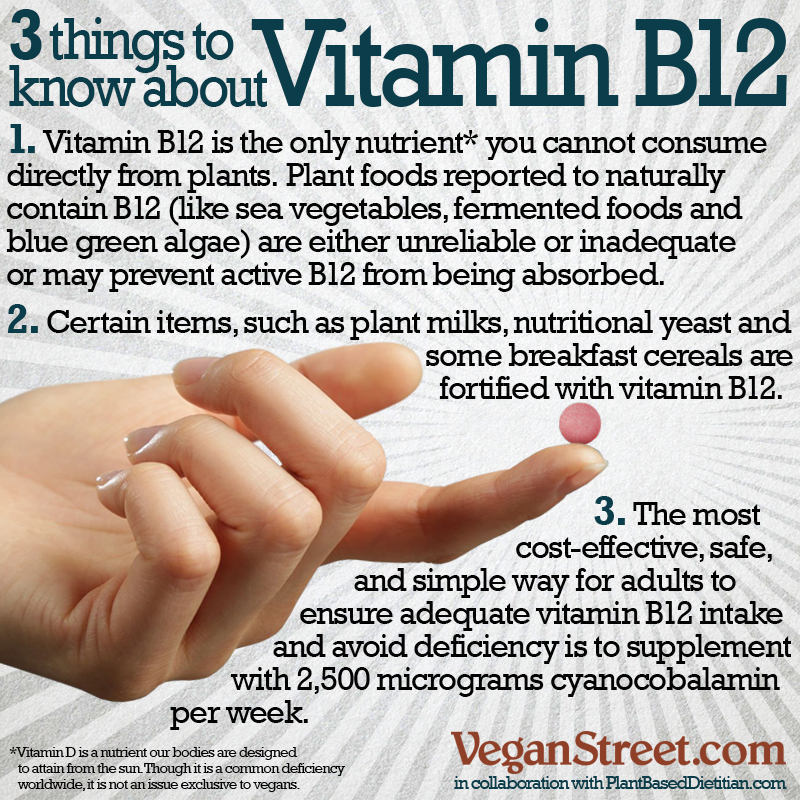 Vitamin B12 is produced by microorganisms found in the soil and in the guts of animals, which is how they end up in their flesh. Because in modern society we sterilize our produce and do not tend to get our water from natural untainted sources like streams and creeks, we need to be mindful on a vegan diet to supplement with this crucial nutrient.

Blood tests for levels of B12 may not be reliable since your body can store B12 for approximately three to five years and other variables that may skew results. If you do not have an incoming source of B12 as a vegan, you will become deficient at some point…as approximately half of vegans have been found to be. Oftentimes, B12 deficiency doesn’t show up until it is too late and there is already irreversible neurological damage.

Fortified foods and B12 analogues found in fermented foods, sea vegetables, and algae are unreliable at best, harmful at worst because they may block the absorption of active B12.

The simplest, most cost-effective, safest, and most reliable way to avoid deficiency is to supplement. Adults need approximately 50 µg dose twice a day, 150 µg once a day, or 2500 µg once a week.

Here is a chart of recommended dosing across the lifespan via Vegan Outreach.

Taking B12 as a supplement is a small price to pay for the vast benefits to your health, the planet, and to minimize the suffering of animals that occurs as a result of being vegan.